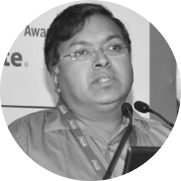 Dr. Devdutt Pattanaik is an Indian physician-turned leadership consultant-mythologist-author whose works focus largely on the areas of myth, mythology, and also management.

He dedicated 14 years to the pharma and healthcare industry working for industry giants like Sanofi Aventis and Apollo Group of Hospitals. He has also worked as a consultant at Ernst and Young.

Pattanaik used to spend his spare time writing articles and books on mythology. What was once a sideline, eventually became his full-time passion. His first book, Shiva: An Introduction was published in 1997.

On August 2010, he was invited by the Indian Council for Cultural Relations to Colombia, where he presented a paper on “Subjective World or Mythology of Identity” to an audience of 400 people, including members of the Indian community in Colombia, members of the Association of Friends of India, special guests, and the academic community.